Solar Impulse is a solar-powered aircraft project led by Swiss psychiatrist and aeronaut, Bertrand Piccard, and Swiss engineer and entrepreneur, André Borschberg. The project’s goal is to circumnavigate the earth in a fixed-wing aircraft that uses only solar power.

Their second iteration of the aircraft, the Solar Impulse 2, has a wingspan of 72 meters; slightly less than that of the world’s largest passenger airplane, the Airbus A380. Incredibly, the aircraft only weighs slightly more than the average automobile! 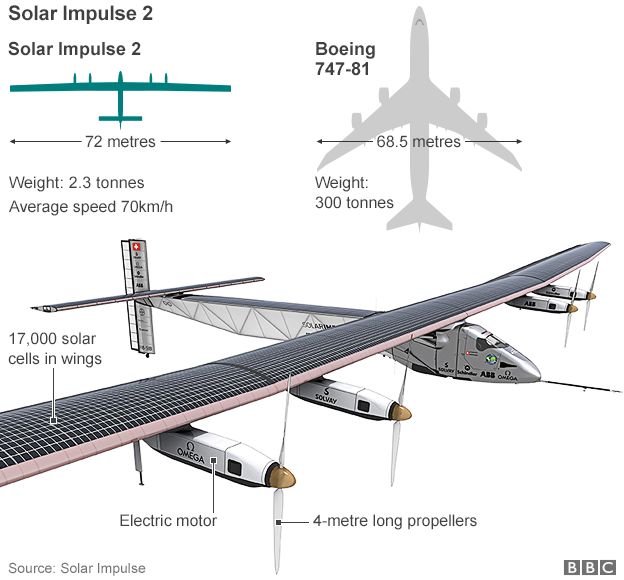 Solar Impulse sought out to create the most lightweight, efficient structure they could build to carry their pilots around the globe.

In July 2016, the Solar Impulse 2 became the first solar-powered aircraft to circumnavigate the world.

Here’s how they designed the aircraft:

Femap also has its own modeling functionality, which Solar Impulse found easy to use, especially for the composite materials that make up a large portion of the plane.

The analysts at Solar Impulse used both imported geometry and the modeling tools within Femap.

The analysts initially used the CAD geometry of the wing’s outer surfaces to create a simple analysis model in order to look at load paths. Later they added 3D solid elements representing the Kevlar® aramid paper honeycomb core for more detailed analyses such as local and global buckling.

FE models for the plane’s metal components range in size from 50,000 to 500,000 elements. The model of the main wing structure contains two million elements. Normally the analysts evaluate 10 to 20 load cases, but endurance analyses look at as many as 160.

Speeding things up with automation

On a project like the Solar Impulse, automating processes can save time and avoid repetitive tasks for a team of analysts.

Piller’s team took advantage of the Femap API (application programming interface) to write scripts that automate some of the analysis work. One very useful script applies the company’s own programmed strength criteria for the composites, helping to automate laminate verification.

Another script runs after the analyses of composite parts, and automatically evaluates the results according to the ply with the highest stresses, quickly showing where the failures are in the laminate or sandwich structure.

“Scripts such as these save time and, equally importantly, help ensure the accuracy of the analyses,” says Piller.

The analysts use the Femap data table frequently as a way of quickly summarizing and interpreting analysis results. The data ranking function, for example, quickly shows minimum and maximum stress values. “We use this capability a lot; what makes it really useful is that it’s possible to combine output sets,” Piller says.

Using FEA with Femap, Solar Impulse was able to reduce weight across the aircraft structure

The single-seat cockpit of the plane that flew around the world is tiny (3.8 cubic meters/134 cubic feet), but it’s actually three times larger than the cockpit of the first Solar Impulse plane. (In fact, the new cockpit is so much roomier that the Solar Impulse website jokingly claims that the company has “upgraded the pilot to business class.”)

The new plane’s wing structure is another place where the analysts were able to achieve significant weight reduction. The wing consists of a Kevlar honeycomb core covered with an advanced carbon fiber material. Because the new plane flies faster than the first one, its wings had to withstand greater loads. Analysts used Femap to optimize the amount of the carbon fiber plies so that they could meet the needed loading conditions with the least amount of added weight.

Similarly, the motor gondola of the second plane had to carry a heavier load, but the weight increase was kept to a minimum, in part by changing from a framework structure with fairing to a sandwich structure and, in part, by using FEA to optimize components such as facings and spar caps.

In the end, Solar Impulse was able to create an aircraft that weighed the lowest possible while still being able to meet the rigors of around-the-world flight.

“Using Femap, it was really fast to see what we had to work on and where we could optimize,” Piller says.